The chronically confused and often crass editor of the Sunday Star-Times, Cate Brett, has let her artless, ignorant, credulous, bigoted, unworthy shitscrawlings smear the presses again. [Or she is at least responsible for its content - trouble is this morning after five minutes of faffing around her PA couldn't confirm that it existed let alone who had written it! It's your editorial isn't it?! - she said she couldn't find it then she transfered me without warning to some random answerphone. But it is certainly stamped with all the Brett hallmarks.] She doesn't dare put them online. Or we would tear the pompous, light-weight faffery limb from patronising limb.

This is the shame of the press. The editorial position of the Sunday Star-Times, under the editorship of Cate Brett, is not even worth putting on the internet. Can you believe this woman:
...has resigned to take up a role with the Law Commission.
Ms Brett has been hired as a senior policy and media adviser to assist the commission on a range of projects including the review of aspects of New Zealand privacy law and the review of the regulatory framework for the sale and supply of liquor.
She takes up the post in November after working out a three month notice period with the Sunday Star-Times.
A former editor of The Weekend Press in Christchurch and deputy editor of The Press, Ms Brett was appointed editor of the Sunday paper in 2003.

If I had to describe it to an overseas visitor, I'd say: The Press is the provincial bastion of pedants, panty-sniffers and Cantabrian curtain-twitchers. It is a myopic and phobic concentration, outlet and reflection of seething white anxiety. It appears she soaked up enough of that culture to have it affect the way the Sunday Star-Times operates now.

This is courtesy of The Inquiring Mind, just a couple of pieces from there to give you a whiff of the stench: 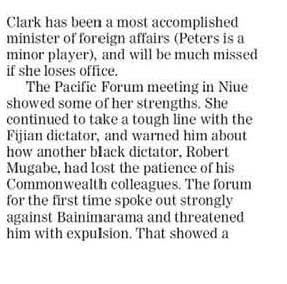 Graduate of the Paul Holmes school of racial etiquette - certainly:

That's your racist projection, love - not the PM. H1 has many awful failings but being overtly racist to people in the field of diplomacy isn't one of them. In the image it doesn't look italicised, it's not supposed to be ironic or something. Was she making a colour/race distinction between dictators like Pervez Musharaf who are not as black as say Mugabe? Was she trying to make a distinction between white dictators and black dictators? Or perhaps more likely she demonstrating that the only thing she did know about either of them was their skin colour.

How can she have ever been leading a landmark national publication? It's like the Herald putting dotty Aunt Madge from the Complaints Corner column of the Pakuranga Courier in to cover the fall of the Berlin Wall.

Why would people pay even 10 cents to get that in print when they can get all the real news in the paper - minus Cate Brett's stupid shitscrawlings - on the internet for nix? The cover price massively over-states the value of this Australian corporation's advertising vehicle.

Grasping at the Prime Ministerial dungarees, staring up with swelling doe eyes at our Dear Leader, it continues: 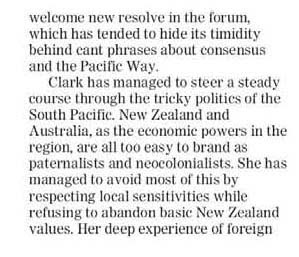 And this breezy, blithe filler goes on and on. What can I say? She doesn't mention China's role in the Pacific, she goes on about Iraq but fails to mention the PM sent our military there after the initial fighting stopped in order to help the US occupy it. At least she had read about the cricket tour to Zimbabwe that went ahead - I guess that popped up when she googled "black+dictators."

Her thoughts are gross and by her own organisation's reckoning, also worthless.

Mugabe is black, is a dictator and happens to be one of many so the term is accurate.

I can see why you have an issue with accuracy which is why you went in to blogging.

Great post Tim, I must confess I overlooked the black dictator bit, which was careless of me.

The fact that Brett is going to provide policy advice to the Law Commission on privacy and media is really scary.

Also in yesterday's print edition, I couldn't find it online was a puff article on Brian Henry.

Thank you for the link

Good of you to defend other ethnicites Tim, now about those dirty Chinese.

A good follow up from Adam's original piece. Let's stop kidding ourselves that her new role is a meritorious situation. This is just another incident of Clark rewarding her familiars for years of faithful service.

Are those excerpts serious? I thought I was reading a piss take...

Lest we forget - if you truly wanted a bigoted fuckwit of an editor, then Brett's predecessor Sue "Shit"win takes the turd tiara. As hard as Brett may have tried, she couldn't compete when up against her moronic forebear.

AH fuck, I just scrolled down and saw your earlier post regarding that stupid fuck Chetwin. Well, colour me motherfucking redundant!

"Another black dictator" out of context and they appear mildly racist.

In the context of the article, comparing him to Mugabe it doesn't seem racist to me. They are dictators, they are black. Its not like she calls them "watermelon eating porch monkeys who machine gun their own people" or anything.

Those is glass houses eh?

Are you white Tim? Are you seething?

Because I am, and I'm certainly not.

CLARK MIGHT NOT BE RACIST BUT SHE SURE AS HELL IS STUPID.TO RUN DOWN OUR EDUCATION SYSTEM LIKE THAT TODAY IN THE HOUSE REPLYING THAT THE PEOPLE COMING INTO N.Z WERE BETTER EDUCATED THAT THOSE THAT CHOOSE TO LEAVE TO ESCAPE THE NET ON STUDENT LOANS IF POSSIBLE.WELL THAT'S WRY I'LL SAY MATE!

"Are you white Tim? Are you seething?"

He's black on the inside.

I'd be seething too if I was stuck in a cell with 3 other prisoners unable to get my end off for a year.

You are right. That woman has no class.