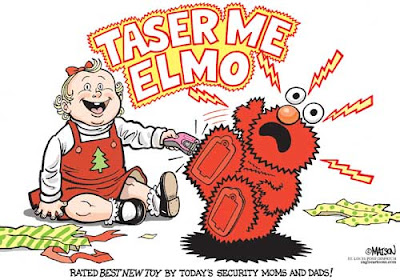 Police Association applauds Taser plan
LATEST: The Police Association has welcomed the decision to proceed with Taser use, but says the decision highlights police being used as political pawns. Association president Greg O'Connor said the Taser decision reflected the "politicisation of police" and was a "cynical and calculated attempt to divert police and public attention from the Government's u-turn on the democratic rights of police officers". He was referring to the Government's decision not to support the rights of police officers to stand for local councils.

Incredible, Greg still manages to find time to attack the Government even after they hand him his blessed tasers! This process has been a farce, it was not as Amnesty International points out, a rigorous, independent or impartial inquiry into tasers and it didn’t take into account the 300 deaths following Taser use in North America since their 2001 introduction and Annette King claims Tasers will be used to "subdue a person under the influence of drugs, mentally disordered or in a frenzied psychological state", which are the exact conditions most consistently seen in deaths following Taser use. King says that only trained front line staff will use the Taser, but again as is pointed out in the Police Association’s June 2008 report there is a “disturbing trend” for more sworn officers to be exempt from mandatory training and it highlights “a lack of agreement as to what constitutes frontline” So a murky world already exists as to who will be trained and what constitutes frontline Police, so King’s assurances mean jack shit.

boo hoo hoo criminals are going to get tasered!

Dont wanna get tasered? obey the fucken law! I think that seems pretty simple dont you?

idiot. some cops have the zap first, deal with the person later mentality. as seen some cops are just plain ol gung ho and don't mind blasting. if it was just for crims, maybe, but its usually not. the public need to be fearful now that cops have yet another way to mess with you!! And Amnesty International said the whole deal was dodgy as!! as always, have to watch out for random badasses AND cops. peaceful new zealand huh...

So potaua would you rather they were 'blasting' with guns or tasers?

Unfortunately that's the reality of the the debate with the state of violent crime in NZ these days.

How about a baton to the head then?

More to your taste perhaps.

"the public need to be fearful now that cops have yet another way to mess with you!"

I don't feel any fear. Anyone one else fell any fear?

It's mostly gonna be maori scumbags who get tasered anyway.

So it's a win-win situation.

be a good boy and you won't get tasered!
Simple!

And to those who think only law-breakers get shot/tasered/pepper sprayed/batoned - tell that to the Rotorua judge who just found the cops guilty of illegally pepper spraying a peaceful political protester (on an anti-GE demo).

Or Rawiri Falwasser - batoned and pepper sprayed extensively in a Whakatane police cell because his mental illness meant he didn't want to be photoed or fingerprinted. Cops got off of course. What a shame they didn't have tasers to finish the job off aye? Yeh right!

The giveaway was Rant O'Connor of the cops union demanding they not lose guns now they have the 'non-lethal' taser gun. Presumably so the cops can shoot ya after they've tasered ya. Nice.

Good point on Rawiri Falwasser. He was a maori piece of shit so its unfortunate the police didnt have a taser available