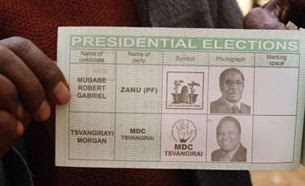 Al Jazeera reporting that voting is now over in Zimbabwe and the results will start to come in tomorrow. As the picture above confirms, Tsvangirai is still on the ballot. The ZANU PF thugs are on the streets checking for the ink marks that prove people have voted in an attempt to foil the MDC's boycott. The obvious thing for the opposition to do would be to vote - vote for the MDC candidate. But there are reports - limited reports - also of these ZANU PF operatives trying to get the serial numbers of ballots so they can match them to voters.

I still think the decision to pull out was wrong. Has it stemmed the violence? Has it brought a solution closer? Or have they pissed away all the hard work because they are divided and in disarray?

Talk of a national unity government of MDC and ZANU PF is entirely impossible without the removal of Mugabe and his key cadre. Which brings us to the crucial role of South Africa.

This story from a leading Jo'burg newspaper destroys any credibility Mbeki and his mates have in dealing fairly with the Zimababwe crisis:

Information at the Mail & Guardian’s disposal points to a cosy relationship between the defence forces of both countries, as well as government-to-government arms transfers. This appears to conflict with President Thabo Mbeki’s mediation role between the ruling Zanu-PF and the opposition MDC, which demands neutrality.

The M&G can also reveal that private South African companies have sold arms to Zimbabwe and that these transfers must have been approved by government’s National Conventional Arms Control Committee (NCACC).

The committee is chaired by Minister of Provincial and Local Government Sydney Mufamadi -- who also happens to be Mbeki’s envoy in the Zimbabwean negotiations.

Looks like someone is getting ready for a possible civil war.

To be fair these weapons have been going across the border for the last 5 years or so and that they are not only being supplied by private dealers, but also by state owned corporations. These included engines for DC-3's and repairs to helicopters, ammunition and light weaponry. In return, Zimbabwe has been supplying training staff for the SA air force since the majority of skilled SA military personnel have moved off shore.

Further the SA government had arranged for the state run ARMSCOR to transport the arms from the Chinese ship.