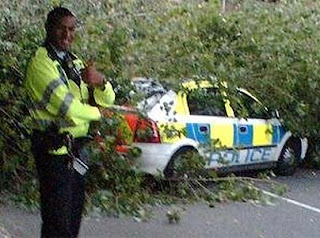 Eighteen police officers have been disciplined for using the Facebook social networking website to brag about dangerous crashes. Photos of police vehicles that had been driven into lampposts and other cars were posted on a group on the site called "Look I’ve Had a Polcol". Polcol is slang for police collision. One picture showed a uniformed officer giving a thumbs-up in front of a wrecked patrol car pinned underneath a fallen tree.
.............


The group, which had more than 200 members before being closed down, also contained stories about collisions with pedestrians. "Ran over a drunk. I believe he has a permanent limp and a hefty payout. I was given a three-month holiday from job driving. Ooh, bummer," one member wrote.
..............
In this latest escapade where police meet Jackass in the United Kingdom, rebel cops and dangerous drivers unite over their mutual fascination with the carnage and aftermath of serious crashes. Preserving the moment with a photo, these bastions of society then go and trade their memoirs on Facebook with those who are breaking the law; some go so far as to boast of the injuries they inflict on others.

Looking at this story and its accompanying pictures, I am struck by how this article reads like an advertisement for the New Zealand recruitment campaign for police, 'Get Better Work Stories'. Visualise wiping the over-zealous 'thumbs up' and add in an aftershot of this guy standing around the barbeque discussing it with his mates over beer or some zappy grey and red graphics and you get the picture.

Produced by M&C Saatchi, the campaign conveys a message that police are not driven by the desire to create safe communities but primarily the desire to boast about witnessing crime to your mates. The television advertisements are divided into two kinds: one that positions having a boring job as something that makes you weak as a male and the other positioning respect as something you gain from your involvement in combating crime as an extreme sport. The office worker who sends his baby to sleep speaking of his boring life is clearly the emasculated opposite of the cop who runs criminals down 'easy: good thing we get paid to keep fit'. While I empathise that we certainly need to be able to make pursuing a career within the police an attractive option for our youth – let's face it the police perform a lot of positive work within our communities – do we really need to send the message to our future preservers of the state that the definition of an exciting day is engaging in sadistic voyeurism?

I'm not sure that these advertisements and the way they sensationalise crime are the best way to instill public confidence in the police, or that they set a positive role model for recruits. On the website, many of the personal testimonies from police officers currently in the force read as noir-styled tales of the the underworld, detailing the pleasure in punishing. In the words of one 'fall guy' who acted as an undercover drug buyer for police upon seeing his catch outside the High Court: 'I cracked up laughing, at which point his drug-infused brain finally put two and two together. He changed his plea. Catching baddies isn't always that easy, but it can be fun'.

"do we really need to send the message to our future preservers of the state that the definition of an exciting day is engaging in sadistic voyeurism?"

When the reality is that you'll be picking body parts off the road after car crashes and dealing with armed P fucked gangmembers while unarmed how do you think we'll get people to take the job on.

Phoebe, you could always join up and create your own "better work stories" and be a positive role model and instill the public confidence you mention that way.

But then again it may be easier being another of Bombers poodle's taking cheap shots whenever you can.

Somehow I expected better from you.

...
Reading the above posts I see your cutting analysis are putting the backs up of the usual suspects - btw Phoebe is no ones poodle.

I think you raise a strong point Phoebe about the image of masculinity being advertised for the Police, I also note the recruitment advert that just sells the $50 000 starting salery, does Society benefit from having Police who want the money and don't care about the job?

BTW - Phoebe is no ones poodle and as for Somehow I expected better from you., I'm sure Phoebe will be crushed that a blogger called stinky who attacks the person rather than debate the idea thinks less of her, how will she sleep?

Yeh thats right Phoebe, why don't we advertise the truth of what its like to be a cop?

You will spend the majority of your time attending domestics, sudden deaths, road crashes, mental people, civil complaints over hedges and deal with the victims of various assaults/crimes who will never get 'justice' in our legal system. Perhaps %5 of all the jobs you attend will involve actual crime, the rest will just be dealing with people who lack the ability to live their lives without hurting others.

You will work long hours, you will be expected and forced to do lots of overtime, you won't get paid a cent for doing it. You will be spat at, assault and forced to go to court on your days off.

You will then read in the papers constantly about what a horrible job you are doing and how the public has no faith in you. You will be judged not on the actions of the majority of your colleagues but on the actions of a vast minority of bad cops.

Hmm I think appealing to peoples greed might be a better idea, don't you?

Hey, how cool.
Bomber has found himself a female blogger, and she hates the cops as much as he does.

I'm all in favour of police sharing their experiences provided they aren't giving away operational security or the privacy of others.

If a cop has a bad day and smacks his car ito a lamp post.....go fir it. I want photos and video if you've got it.

If they have attended accident scenes, let them talk about that,k too, provided they aren't graphically describing the accident in today's newspaper for the relatives of the deceased to read. Even then, there would be those would probably much appreciate the human connection - reaction - to what happened.

Police are human beings, fer crissake. Let them share - and vent - like anyone else, provided the bounds above are respected.

The public, politicians and senior police have to stop treating their staff like robots. Doing so only encourages the most negative aspects of police culture: "Them and us"; "cover your ass no matter what" and places their families under enormous strain as the only outlet for the stresses of the job.

This is interesting - I think you are misreading my argument entirely. I do not hate cops at all, as detailed in the body of my comments. I am just interested in the advertising - it is something that I teach a course on at university.

It is not a cheap shot, obviously the intersection of the Youtube generation and state forces such as the police and the military raises new issues. I am merely pointing out that there has been a shift in the way police are represented in NZ. That could be read in a number of ways

I am trying to raise intelligent debate - not take potshots. Blogging doesn't exactly give room for sustained analysis: give me a break.

P.S. Thanks to the police for sharing here on the rigors of the job - it is good to know we have politically engaged police who really care about their communities.

Also, truth seeker, your argument is interesting - I agree we can't dehumanise the police. I realise that to some my argument probably sounds like the need to reinforce a conservative view of the cops - it is not. Rather I am saying the campaign could do with a tweaking. Promoting the police force as a new form of Jackass for the under-35 men is a little different than making it sound exciting.

Anyway, you are right of course. The rather poorly hidden subtext of the 'better work stories' campaign is designed to attract the thrill seeker to police work rather than those interested in the community relations side of things.

The reality of being a cop is dealing with road smashes, busting teenagers for smoking pot, domestic violence calls and writing reports. Lots of reports.

Just to clarify: I am not a love interest or a poodle. I have my opinions - shock horror!

Thanks for clarifying that Phoebe, I thought Bomber's immediate leap to your defense was a bit undermining of your intelligence and strength. Almost patronising you could say.

No offence intended Phoebe. I agree with the poster above Bombers response was quite patronising and made me wonder!

"P.S. Thanks to the police for sharing here on the rigors of the job - it is good to know we have politically engaged police who really care about their communities."

"Rather I am saying the campaign could do with a tweaking. Promoting the police force as a new form of Jackass for the under-35 men is a little different than making it sound exciting"

I think you will find that lots of Police would agree with you on that point. Those adds are not attracting the right type of people to the job, and anyone who joins the Police lured by the promise of an easy 50k are the exact opposite of the type of recruit the Police need. Once they realize they don't get paid for overtime and how hard the job is they will be out the door in no time.

Perhaps spending all the money they spend on advertising into retaining existing quality staff rather than simply filling shortages with people joining for all the wrong reasons would be a good start.

Wasn't sarcasm - I am actually thrilled to see the compassion in these comments and that there are police participating in the debate. I am an existentialist at heart and it makes me happy to see people fro all walks of life engaged on the site.

I guess individual police usually are discouraged from making their perspectives clear due to having the Government of the day as ultimate boss means that there is not really a forum for those who know the job best to speak out. i mean this in the same way that being a lecturer sometimes can restricts your liberties in being too drunk in public spaces - being a police officer is one of those jobs that dictates your personal freedom.

No one has offended me,although of all dog species I must admit I have a particular dislike for Poodles.

I wish my missus would join the police.

Her work stories are crap!