Tsvangari still enjoying the hospitality of the Dutch. The ANC are finally weighing in. 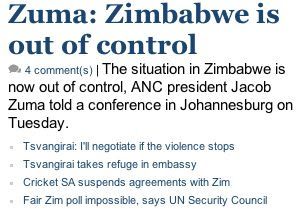 Military intervention in Zimbabwe had to remain an option, the former high representative for Bosnia told the Times of London, while also lamenting the "thunderous" silence of South African President Thabo Mbeki.

"The situation in Zimbabwe could deteriorate to a point where genocide could be a possible outcome -- something that looks like Rwanda," he said [...] were the situation to deteriorate to that point, military intervention, with Britain playing a "delicate role" due to its history as Zimbabwe's former colonial ruler, would have to be an option.

"I think the UN Security Council resolution and the UN secretary general's statement yesterday [Monday] is likely to be influential and have an effect," he said.

"Secondly, the key person in this is Thabo Mbeki, and so far his silence has been thunderous.

"If it were the case that in addition to all the other African friends who have so far supported Mugabe, Mbeki, who is under pressure to do this anyway from within South Africa, were to come out in a very strong statement, I think that would have an effect.

"So there is a diplomatic game to play through here and I think it's not without hope of success."

The UN Secretary-General has spoken out about Mugabe, and the security council has unanimously condemned his regime. And a good comment to that article because it highlights the role of our mate, the casual Friday Police Commissioner:
Zimbabwe police Commissioner General Augustine Chihuri said the police had been "shocked and surprised" by Tsvangirai's decision to seek refuge in the Dutch embassy. What a joke! Not too long ago policemen under Mr Chihuri's very command detained and severely assaulted Mr Tsvangirai in a police station under his command so badly that one side of his face was severely swollen and he had to seek medical assistance in South Africa. No formal charges where laid, they simply took him inot the police station in order to assault him. It is now abundantly clear that ZANU-PF have absolutely no concept whatsoever of the the most basic tenets of the democratic progress. Completely bankrupt when it comes to innovative and workable policies that can restore the Zimbabwean economy they have proven beyond any doubt that they are nothing more than brutal thugs who will even kill fellow human beings in order to cling to power for a few days more.

Question. In fact a couple of questions.

Hypothetically, if the United States decided to send a military force to depose this desparate dictator who is both butchering his own people, subverting the democratic process and destabilising the region would this be a good or a bad thing?

How is this different from Iraq?

Sending troops to Zimbabwe may even turn into a bigger screw up than Iraq.

Mugabe still has military support, and paramilitary support from the old bush-war fighters. Sending in white troops would never work, and there are no AU troops to go round.

South Africa's military would probably actually have trouble deploying to Zimbabwe even though it's next door. The RSA military is absolutely wrecked by AIDs.

Thanks for the armchair defence analysis.

I just find it interesting that those in favour of deploying a military force to Zimbabwe to depose one tyrant were so opposed to sending in troops to depose another middle eastern tyrant.

Hey, give Mugabe a chance.

He could be a success story like many other Black African leaders.

Africa is a shining jewel of culture and beauty in a white, oppressive, Eurocentric world. Zimbabwe could be the shiniest jewel of all