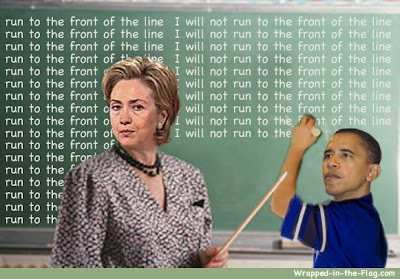 Look at who voted for Hillary, working class Catholics – if there was a more loyal group who would bind to you for life, it’s blue collar Catholics. In a depressed economy where the coal and steel glory of yesteryear really does lead to the very bitterness Obama honestly commented on, one thing is left to cling to, loyalty. Even though she had a 20point lead over Obama and he managed to whittle that down to 10points, loyalty won over dreams in Pennsylvania yesterday and the stage is set for an even more bruising nomination battle where Hillary can only win by a convention breaking superdelegate revolt which will alienate the youth and black vote plus the funds they have injected all of which will forecast a McCain win. The blood is on the floor, all that’s needed is for both candidates to slip in it – what a fascinating, fascinating election.

That's how the election should be decided.

She's got the jewish vote by threatening to nuke Iran in the vent of an attack on Israel.

I feel sorry for Bill, imagine having to put up with that.

Obama lost out simply because of this quote:

"Some of these small towns in Pennsylvania, and like a lot of small towns in the Midwest, the jobs have been gone now for 25 years and nothing's replaced them. And they fell through the Clinton administration, and the Bush administration, and each successive administration has said that somehow these communities are going to regenerate and they have not. So it's not surprising then that they get bitter, they cling to guns or religion or antipathy to people who aren't like them or anti-immigrant sentiment or anti-trade sentiment as a way to explain their frustrations."

A lot of people took that very personally and when summarised and quoted out of context it's even more damaging.

...
hmmmm - Im not so sure - they were asking voters on Fox News who voted for Hillary about the bitter comment and all of them agreed with Obama that yes a lot of people there were bitter from the recession - and that was on Fox! I think it came down to loyalty, when people are hard pressed loyalty comes before dreams. Look at the margin he won in Philly, they were hoping for an 80 000 buffer and ended up with 130 000 lead.

Hopefully Hillary Clinton will stay around till convention and super delegates support her. Good news it will seal a win for John McCain (War Hero) in November.

If Obama is the candidate then it going to be a McCain win for sure. Republicans will make mincemeat out of his background and that crazy preacher.

The only chance the democrats have is with Clinton.

That being said I don't doubt the capacity of the dems choosing the worse possible person.

More loyal than black voters who are going 9 to 1 in favour of Obama? He's good but he's not that good. So there must be a lot of blind racial voting going on there.

Or the white women who flock to Hillary? Again a blind gender preference.

Interesting that you pick on Christian loyalty but not a mention of either of those groups.

Also interesting that those bitter, racist, white males came closer to calling the race as it is (ie. near even) than any of those other three groups.

Finally everyone gives Obama props for bringing out his voters in big numbers, as they should. But nobody mentions that Hillary is doing the same thing with hers in order to stay in the race. Could it be that they are both great candidates?

Your picture person, pictorialist, graphic artist ..will tomorrow receive the Medallion of Quixote.
I have decided.
The medal itself will be redesigned to be simple and plain, as recognition of talent.
We like to give medals to people
with names, but in the event you do not supply name, we will give it anyway.
You should inform your picture person that just as Tim Selwyn did,
he/she will benefit and courage and resilience forever.
The medallion can never be rescinded and is a symbol of honour
and prestige among all of us.
Even I the formidable Quixote have not this medal.
This will be the sixth medal ever granted ..Spanish Gold.

Partisans will be able to see the specific medal .. the reasons and recommendations for
TUMEKE ARTIST medallion of Quixote

on my site tomorrow.
http://peterquixote.blogspot.com/

Even if they are both great candidates they are handing the election to McCain on a platter. By dividing Democrat ranks between them thay are all but throwing away what was as near to a dead certainty as the Democrats could have possibly had.

Yeah, the dems have a habit of being divisive to the point of self-destruction while the republicans are more disciplined.

If you can get the religious right, gun owners and pro business anti tax lobbyists and working class blue collar protectionists under the same roof and voting for you then thats an edge the dems won't have cos they're busy arguing about pointless shit.

dont be so sure dudes, the old bitch is crazy power hungry mad, ugly even,