State of the Union (live blogging)

You'll have to refresh the page to get the updates. 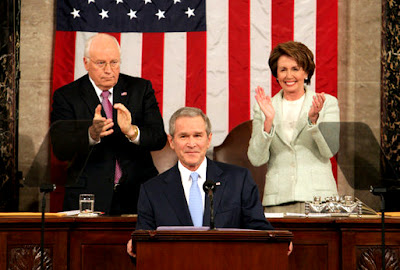 The suited multitudes are milling on the floor of the House. A lot of glad-handing. The speaker and VP are shuffling papers. CNN takes the opportunity to have Romney and Huckabee comment right beforehand. Hillary and Obama - being Senators - are already in their seats. Fox is having a body language analysis of the various election participants - actually quite good.

The Justices of the Supreme Court are lead in to applause. The military as usual - as in all dictatorships - are already present. Who invited them? The first lady gets a special applause too. Daughters look hot.

The President's cabinet ministers are lead in. Condi pumping hands... Don't recognise the rest of the cabinet - can't see the Fed chief either.

President is announced. Handshakes with both hands at once to maximise the false sincerity. Over the top American hoopla begins straight away - he wants to shake everyone's hand and have a brief word. He's laughing - but as yet no winks. Greets the military - since when were they in the three branches of government? Why do they sit right at the front?

Ok, he's at the podium and the applause - inexplicably is continuing. Speaker announces him, more applause.

"7 years have passed since I first stood here..." How embarrassing. Mentions the 110th Congress - quite an achievement for a regime to have stood so long. He's explicitly addressing Congress here - not the judiciary and the military. "In the short run we can see this growth is slowing... package includes tax relief..." vigourous partisan applause from the Republicans. Gets a silly dig in for those who don't mind paying high tax. Now standing ovation by Republicans about making his tax cuts permanent. $18 billion in spending cuts. Says will balance budget in 2012 and then has the bloody nerve to say if households should balance budget then so should federal government! He's the one who pushed it into deficit in the first place! What a cheek - the audacity. More standing ovations from his party. It's already silly to do this every time - and the speech has only just begun.

Housing is a big issue - tax-free bonds to refinance big mortgage companies is his solution.

Close up on Hillary - she's clapping so lightly I'm not sure her hands are even touching. But that's because he's on to health care - his answers are weak- you will never catch him saying "universal" in relation to health care.

Education: he praises bi-partisan initiatives. $300 million grants programme - but his accent has such a thick Southern twang I didn't catch what the name of it was.

Trade: He wants deals with several central and South American countries - following the one done with Peru. "Strategic" trade deal with Columbia to fight off "false populism" ie. Chavez in Venezuela - but he'd never mention him by name.

Justice: Demands from Senate quick confirmation of his judicial appointees (I think every President says this). "Faith-based groups..." need more breaks from congress for funding.

Immigration: secure borders. Doubled the number on border patrol. Seems to compromise on illegals - wants a bob each way - but put in a vague enough way to get applause.

The little hypocrite's talking about how they'll "deliver justice to our enemies" and "evil" etc. "Spreading the hope of freedom" - Fuck off you prick - what a fatuous, empty lie.

In Iraq: it's just peachy, enemies on the run etc. Surge working. "Grassroots surge" from Iraqis. "Last year Al Qaeda had many sanctuaries..." yeah but before you invaded there were none there at all. "Enemy will be defeated" - huge applause and shouting etc. I note the Supreme Court justices don't stand up to applaud every time. "Solemn pledge: you will have all you need to protect this nation... congress [should] fully fund our troops" So open chequebook for the military (again) - that programme will never be cut under Bush. Troops will be drawn down (slowly). Now he's going into Iraq's domestic political agenda etc. Like it was their province.

"The holy land [...] New cause for hope...Define a Palestinian State by end of the year" - what a joke! They haven't even defined Israel yet - that's the whole problem!!!

Iran: continues to be evil. Message to leaders: come clean about nuclear intentions... "we will... defend interests in Persian Gulf" Hey you prick - it's called the "persian" not the "american" gulf! Of course he will never, ever, mention Israel's nukes will he - or their aggression towards other states - or their strangulation of the Palestinians.

Change conditions that set up hostility to the US. Sudan, Cuba, Zimbabwe, Belarus and Burma mentioned by name as regimes they oppose. AIDS and malaria programmes in Africa. Wants $30 billion over next 5 years to fight HIV.

Veteran's "funding up 95%." Well he probably created more than 95% more veterans through the Iraq war anyway didn't he?

Constitution mentioned - he must be winding up. "God bless America!". And what a massive beaming smile - of relief no doubt that he got through it all without any major cock up.

Brit Hume on Fox says 70 applause moments during the speech.

More glad handing and he's even signing autographs. He's quite personable from what we see from the on the ground camera... likable guy, sure - but President of the United States of America? Nah. They've got 300 million people - they must be able to do better than this.

So my impression was a fairly boring speech - not inspiring. Typically anti-Iran and pro-military - so not really anything remarkable. His health initiative... oh, was there one? Education was some sort of voucher scheme from what I heard. A lot about Iraq - I think he said 20,000 troops will be heading back to the US soon and a slow draw down all delegated to the General on the ground. Totally at odds with Obama and Edwards.

That's how I saw it. No mention of North Korea and nothing about Russia or China. Didn't hear them mentioned. Nothing about Europe or the UK either. Come to think of it he didn't even mention "our allies" in Iraq either because, I assume, the UK and Australia are keen to get out. Also nothing about infrastructure and investment in it.

And now the spin begins. The Dems have a "pre-buttal" carried on most channels - but a totally dead delivery. She's boring us senseless.

George "Mr Popular" Bush dishes out more of his bullshit to his cronies. More coreographed ovations, more of the same bullshit. Nothing but bullshit.