The face of NZ justice 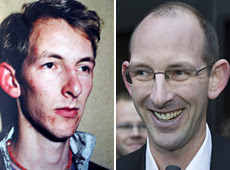 Where are my pro Prison bloggers at? Where are my pro police bloggers at? As I watch the abortion of Bain's trial finally lanced by his bail, I can't help but notice how silent the sensible sentencing get tougher on crime band wagon is, not a squeak from any of them. Could it be our overcrowded, racist and violent prison culture and the idea of throwing innocent people into it from flawed and incompetent cop work may ping NZers conscience a little? Look at Bain's face folks, that's your NZ justice system right there, we should all feel a lot less proud about our country.

Free and happy - Bain plans for time with friends
Dozens of people sat in highly charged silence in the courtroom awaiting their first glimpse in more than 10 years of a man at the centre of a crime that had fascinated the nation. The tall, lean figure of 35-year-old David Bain strode quietly into a courtroom focused entirely on him, with his head held high. Clean shaven and dressed in a neat black suit jacket and trousers, a crisp white shirt unbuttoned at the neck and well-shined black shoes, Bain was a far cry from the awkward, acne-faced young man photographed in loose woollen jerseys after he was charged with murdering his family in 1994. Yesterday in the High Court at Christchurch, Bain's brown hair was cut short and had thinned heavily on top. His metal-rimmed rectangular glasses gave him the image of a well-groomed professional. He walked slowly into the court from a side door and smiled briefly at supporters as he took his seat. He sat bolt upright in his chair alongside a prison guard, his hands clasped in his lap, staring straight ahead at Justice John Fogarty. Stony-faced through most of his bail hearing, he occasionally allowed himself a hint of a smile as things appeared to be going his way. It was not until the judge confirmed he would be allowed bail that his face lit up in a huge smile. Asked later what was going through his head as he listened to the judge, he replied: "Nothing. Just trying to keep going minute by minute by clasping on to the strength that Joe [Karam] has given me over all of these years." Outside the court, Bain told the crushing throng he didn't really expect the hearing to go his way. "I was preparing myself for the worst," he said. On the steps of the court building, Bain thanked all the supporters who had kept faith in him. "I have had a lot of friends that have kept me going. They have all kept me going." He made sure he exercised the night before the hearing "and got myself tired so I could get some sleep". Bain was heading to the upmarket Clearwater Resort, 15 minutes from central Christchurch, for his first night of freedom after more than 12 years behind bars.
Tariffs at the resort start at $436 for a lakeside room. Last night, while inmates at Christchurch Men's Prison ate spaghetti bolognese with two slices of bread and a piece of fresh fruit, resort guests could choose from entrees of Cleveland Coast oysters in a crayfish bisque at $21.50 and pasta mains with green beans, gourmet potatoes, chopped parsley and basil pesto with shaved parmesan at $27. Bain said he wanted a "nice salad" and time with friends for his first night away from prison bars. Earlier, in court, Bain's supporters broke into applause as it became apparent the hearing was going in his favour, prompting Justice Fogarty to ask for quiet. "This is a very difficult job to do," he said. He suppressed all submissions relating to the Crown case. Both tiers of the public gallery were packed with more than 200 Bain supporters, police and court security officers. About 30 journalists filled the jury box, the court dock, and extra seating lining one wall of the room, with another 20 stationed outside. As the hearing ended and Bain turned to his supporters, the public gallery erupted. Bain embraced his chief supporter Joe Karam in a bear hug, before being led out of the court. His first taste of "freedom" was being met by by reporters, photographers and camera operators all jostling for position. He appeared calm and composed. Asked what this whole experience was like, he replied, "pretty scary", and gave a nervous laugh.
- Additional reporting NZPA

I'd be more supportive of your view if David was demonstrably innocent rather than (I suspect) being too much bother to retry properly. Or if I thought the case was typical of the system instead of being "exceptional" - Justice Fogarty.

I could also note your silence whenever the system gets it right and removes a dangerous person from society. Or whenever a guilty party goes unpunished. Or whenever someone on bail / parole reoffends. Which happens more often? Is one outcome preferable to the other? By how much? But then those questions would require some real thinking to answer rather than quick point scoring against the man.

I suspect David's face would look pretty much the same if were guilty. But for the sake of argument let's assume he is innocent. You might think this is a good reason to "feel a lot less proud about our country" but I don't. Look around the world and he could have had it much, much, worse. For example: no multilevel appellate process, death penalty, no free press to expose the problems with the trial, third world jails etc. That's not to say we should rest on out laurels but it's hardly time for the sack cloth and ashes either.

...
We are better when compared to violent dictatorships, long live the status quo

So where should they have put a man convicted of murdering his whole family? A daycare centre?

It's the fault of crap police work and rancid judicial system that he ended up in prison, not the prison system itself. He certainly seems to have been better treated in prison than he was by the police and the courts in this country.

If prison is such a bad system of punishment, please enlighten us all as to a workable alternative for dealing with violent offenders.

That's not the full extent of my point though Bomber, only the most minimalist and begrudging interpretation of it.

If Bain is innocent then you should be happy that he is free, that you know about it, and that the system has worked albeit slowly. If things had gone a little differently then an innocent man would still be in jail. Then perhaps you would perhaps be justified in feeling shitty about our country except you wouldn't know that you should. So be happy dude, Bain is.

And it's hardly just the 'violent dictatorships' that our system looks good in comparison to. How might things have gone in say the USA or France? Unless you can put up a fair list of countries and say that you wish our system was just like theirs then I say we are justified in feeling reasonably proud of ours.

Wonder if he stil has his bad cardigans? Times have changed I dont think he wil get away with wearing them now. Wonder if he will go back to his paper round.

But it took the Lords of the Privy Council to sort out what NZ justice missed. we think we can do better without them... yeah right...

Anonymous makes a coherent post, and in comes hated by most to make yet another attack on the police.

Your blog is dying bomber because people like hated instantly shut down debate.

He doesn't make any useful comment, just bile directed at the police, and the white man. This puts people off, just look through the posts and you will find that they generally end with a hated by most rant.

At least we have public address to go to for adult discussions.

Lets analyse this from the criminal mind.

You are planning a mass murder of your family. Wouldn't you kill a cardigan wearing weirdo like David Bain FIRST?

That's why this does not equate.

...
That's not the full extent of my point though Bomber, only the most minimalist and begrudging interpretation of it.

If Bain is innocent then you should be happy that he is free, that you know about it, and that the system has worked albeit slowly. If things had gone a little differently then an innocent man would still be in jail. Then perhaps you would perhaps be justified in feeling shitty about our country except you wouldn't know that you should. So be happy dude, Bain is.

And it's hardly just the 'violent dictatorships' that our system looks good in comparison to. How might things have gone in say the USA or France? Unless you can put up a fair list of countries and say that you wish our system was just like theirs then I say we are justified in feeling reasonably proud of ours.

Hardly begrudging, more patronizing – how many innocent people are in prison? And wasn’t this only possible because of the Privy Council? Under the Supreme Court, that verdict (now that 2 of the former appeal court judges are on the Supreme Court) may not have happened, hardly a day to be cheering the status quo pal.

UP TO 20 INNOCENT PEOPLE IN JAIL APPARENTLY BOMBER AND YOUR MATES 1 OF EM...HOWEVER AS MUCH AS I AM IMPRESSED BY YOUR ABILITY (AND OTHERS) TO "CUT AND PASTE" OTHER PEOPLES DIATRIBES I THINK IT IS TIME FOR SOMETHING A LITTLE STRONGER THAN THAT MATEY!

VIVE LA REVOLUTIONE...AFTER ALL TIM IS ONLY LANGUISHING IN PRISON BECAUSE HE INCITED OTHERS TO TAKE UP THE CAUSE AND DENOUNCE THIS RAMSHACKLE MOB WHO LEFT NOTHING TO CHANCE FOR ALL THOSE EARNING UNDER $500.00 A WEEK IN THE BUDGET WHO GOT NOTHING AS PER USUAL!

SHAME IT TOOK "A TORY" TO POINT THAT OUT THOUGH...THANKYOU JOHN KEY...MAN OF THE PEOPLE?