There is no corruption in our prison system 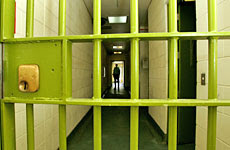 But that would take an imagination, something our usual friends on the right who bay for public lynchings don’t seem to have much of. As the over stretched prison system grinds to a halt under the weight of its own corruption from the sheer increased volume of people we now lock up (don’t we just love to lock people up without thinking through the knock on effects? God bless knee jerk talkback NZ), the public seem to be getting a wee bit ill with the whole thing, you know, all a bit ashamed of their previous years bloodlust, NZers are now realizing that the awful soul destroying prisons they want everyone to be thrown in actually destroy souls and make the prisoners put through it even more bent and out of shape. The problem is that we live in a country where even mentioning the fact that the prison system isn’t working is akin to hating the victims who have been hurt by the criminals, the debate has been conquered by the sensible sentencing knee jerkers, fuelled by a Corrections Department riddled with corruption because those working in the system know that the outside world doesn’t give a toss what happens inside prisons and fanned by conservative politicians like Simon Power who paints prison as an adult Disneyland.

We have to rethink the prison system and we have to eliminate the lynch mobs from having a say.

Jail chiefs ordered to stamp out corruption
Jail bosses have been told to do some "sniffing around" as signs emerge that corruption may not be unique to Rimutaka Prison. Corrections chief executive Barry Matthews said yesterday other prisons were being scrutinised for a Rimutaka-like culture, in which corruption had been allowed to fester. He is certain the inquiry into Rimutaka will snare further staff for corruption - two have already been suspended - and may even lead to a shake-up of the prison's management. Since the department admitted problems at the prison, it has faced allegations that corruption is widespread in the country's jails. Mr Matthews and Corrections Minister Damien O'Connor have rejected that and resisted starting further inquiries. But Mr Matthews said yesterday there were signs of corruption at other prisons and he had asked managers to do some "sniffing around".

Would you lock up Clint Rickards if he had been convicted?

I can not believe how wrong you are getting it - what is this 'Poor Little Prison Workers' sneering about. Are you only brave enough to go for those at the bottom of the food chain ?

Tell me is department lawyer and HR manager Justine O'Connell still in charge of persecuting and removing any staff who report breaches of the Departments Codes of Conduct. She reported to another Head Office woman whose name escapes me for the moment. Why not publish the names of those in local management and Head Office whose raison d'etre for over 20 years has been to protect and promote the abuse of their own regulations and procedures, this policy has, of course, been supported by every minister of corrections.

Why are you not asking questions about Charlie Chauvel’s role in prison corruption and abuse, are you scared he will use his money and influence to sue you. While that is a reasonable fear because if he goes after you, you will be finished, it seems very cowardly to me. I suppose as a bully you will only go after the weakest.

The department will love you. They like anyone who helps them in making sure shit keeps running downhill and lands on those at the bottom. That way the truly guilty, those at the top, can continue building their careers and prosper on unscathed and unaccountable for their lies, cover-ups and persecution campaigns.

Fuck there didn't ask him to look into it did they... is that like the police complaints authority.

Might be a good idea to remove those names - couldn't it cause trouble for the poster ??

You have a responsilbity to protect people from themselves perhaps.

One of the names made me smile, there is a very interesting/amusing event about them. I would tell you about it but your judgement in running this blog seems very lacking.

Be responsible you of all people should know how nasty and dangerous some of these government people can be and sadly they have the money and power to do people a lot more damage than any street criminal ever could.

I was in Paremoremo Maximum security prison when they found a loaded Bereta Pistol that seemed to elude all metal detectors and CCTV cameras over 20 years ago! Corruption? How the fuck else did it get in there? Worse...what else is in there today, if that was 20 year ago?

The Anon comment at 23/03/2007 11:15PM has been objected to by a person named in that comment and has subsequently been deleted - the Anon comment (with the deletion) was as follows:

" Anonymous said...
The name of the other Head Office criminal I was trying to remember has come to me - Katrina Casey.

Do you want more names - here are some Auckland criminals, some have moved on to bigger things - Kevin White, Bill Crawley, John Aldridge, [deleted], Leanne Field, Jan Kayes, Murray Sweet ..... in fact ever manager at Auckland prisons for the last 20 years has either taken part in abuse or knows about it but knows when to lie.

Talk to Nuia Amua (is he still shagging Kim Gibson) the prison inspector – get him drunk and take him to a knocking shop and see what he tells you – not that you care.

This all happens with the knowledge and support of The Human Rights and Privacy Commission, the Ombudsman, Prison inspectors and the Employment and other NZ courts, and PM's and their ministers of course.

As well as Charlie, Helen and Judith, Matt Robson knows about it all and did nothing. Even you love girl Sue Bradford know, and, apart from a 'sympathetic' letter did nothing.

The little people you love to pick on are a safe target but they are irrelevant, if the management did their job the abuses would stop almost immediately.

Give champagne Charlie a big kiss when you see him. Watch him he’s a psychopath, still you have nothing to worry about anything do you, you are too much of a coward to do anything to jeopardise your own safety and comfort.