The ‘anti-smacking’ Bill should go through 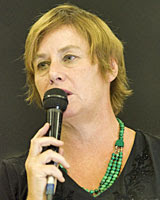 I am angry that the National Party – a supposed ‘mainstream party’ – should slip back into their ‘Maaaaaaaaaaaaari get too much’ mode when wanting to terrorize the population for populist reasons. Listening to Chester Burrows rant on about this piece of legislation ‘criminalizing’ parents is the most irresponsible bullshit I’ve heard from National since Don snarled white peoples lips with his ‘Maaaaaaaari get too much’.

This ‘anti-smacking’ law is a first step to saying we don’t want our children to grow up in a violent environment, and that starts at home with Mum and Dad. Are children a pain in the arse? Oh God they are, and do they need discipline – oh God they do, but should that be done by a frustrated whack when junior is misbehaving – no it should not. Listening to Talkback whine that this law will not do any good as it ‘won’t stop the people who really beat their kids’ is wrong, where as it won’t have an immediate effect on those kids at the bottom, it has forced all the ‘good’ parents in NZ to reflect on what they do to their kids and it will protect those kids as soon as the law passes – listening to all these parents admit they hit their kids while quickly reassuring us that it had no lasting effects is tedious, dull and should be done between you and the priest.

But what about the claims that NZ society will fall to rack and ruin because our offspring will run amok, laughingly having their poor weak parents arrested because they were trying to knock their evil child away from a power socket and now the parent is looking at spending 5 years non parole!

Just try and not hit your kids okay, I’m putting money on most of those in prison right now had parents who hit them as well.

The Smacking Debate
Supporters of the legislation will stage counter-demonstrations in both cities, but Ms Bradford conceded yesterday that "I don't think they are expecting to match the [opponents'] numbers". Two opinion polls yesterday showed strong public opposition to her private member's bill.

Do you think urgency should be used, and if so, why?

Do you think that 80% of NZers are wrong?

See this is the thing. The public of New Zealand do not want this. polls show between 70 and 85% are against.

This bill is undemocratic

Helen Clark knew this at the last election. Thats why she told Radio Rhema that she did not favour a ban of smacking - in other words, she lied.

Helen Clark is a liar.

This bill is not pragmatic, nobody has said it is going to do anything to stop the likes of the Kahui's. This is an ideologicial attempt to impose a certain worldview on mainstream society.

So what we have, to be simple, is a lying Prime Minister attemping to push her ideology onto a public who do not want it.

Read this mornings Hearld piece in the opinion section on how this bill fails to achieve anything.

Its a crock of shit, its disgusting and you just have to hope that this is the nail in the coffin for this government

slip back into their ‘Maaaaaaaaaaaaari get too much’ mode

It is a great tool for social engineering. Investigate "at risk groups" to remove children from situatons of force (slapping, restraining, gripping). These "groups" could be based on a representative survey of our prisoners, because "most of those in prison right now had parents who hit them as well" and there is a "real" need to break the cycle. And the real news is that any "populist" government that did this could escape blame, because they will merely be enforcing Bradford's law.

The irony is that any percieved injustice would only be in the prosecution of this law and those parties most likley to complain are its authors.

Of course there is no way a stolen generation would ever happen in Austral...oops I meant New Zealand.

...
Bomber,
Do you think urgency should be used, and if so, why?
No - I don't think this needs to be passed under urgency because the arguement to pass it is strong enough to stand on its own two feet, children should be free of violence in their homes.

Bomber,
Do you think that 80% of NZers are wrong?
No I think 80% of NZers are scared and worried and in part guilty making them angry while redneck talkback rhetoric feeds the whole 'anti-pc' bullshit.

...
This bill is undemocratic
Hahaha - the tyranny of the majority dressed up as democracy huh Scott, what were the margins against the homosexual law reform bill Scott, or Civil Unions or criminalising rape in marriage? Or domestic violence - did you see the unathorised history of NZ last night? All those NZ blokes spouting open misogyny as cultural fact, it was a reminder that progressive legislation always frightens those who gain authority from the power embalance that legislation enshrines.

what were the margins against the homosexual law reform bill Scott, or Civil Unions or criminalising rape in marriage?

Three examples -
1, striking down a crime that was only ever arbitarily enforced,
2, correcting a discrimination in civil justice,
3, criminalising a brutal act.

Strangely used to justify a law that will make a crime of an act carried out without harm in a large minority of society that will only ever be arbitarily enforced. See example number one and please explain why you think this is going to be any different.

When homosexuality was a crime the police were not marching into action against the great & the good or even the violent & vicous. Instead they targeted the easy, appending the crime of "gay" to make other charges stick.

Policing though the ages. "That little bit of dope is not enough to convict, right you are sir, but we know who you have been with so if you don't want to get him in trouble you best confess to dealing." "You don't want to go talking about batons luv', we saw you spank little Johnny and we got his complaint written down here. Of course it is at our discretion."

Your "Maaaaaari get too much" mantra was three years ago. Time to move on Bomber, your record's stuck.

Now Bomber, to compare this anti-smacking bill to the changes you mentioned is like comparing apples with oranges.

There is a real problem with child abuse in this country. Maybe cracking down on drug abuse and putting tougher penalities for those who do it in place might fix the problem.

But this bill wont.

In fact it will do fuck all except criminalise decent parents who occasionally smack their children for corrective purposes. To equate that with those fuckwits like the Kahui's is pathetic.

So why has the Prime Minister been forced into lying about this?

Do you have no respect for the wishes of 80%+ of New Zealanders who dont want a bar of this?

Or is this another case of the perscriptive left, who knows best, and tells us what to do because we cant think for ourselves

...
No scott, I just appreciate that bigotry towards progressive legislation is always high when people are frightened by the right wing. This legislation is a symbolic first step - just don't hit your kids, real simple.

Your "Maaaaaari get too much" mantra was three years ago. Time to move on Bomber, your record's stuck.
Dude tell me about it - but you Nats just seem to keep humming the same tune with different words 'Maaaaari get too much', 'We should invade Iraq with our American cock sucker mates', and your current hit, "Anti-smacking legislation will make CRIMINALS of good decent hard working parents" - you guys do fear mongering in E minor better than anyone else I know!

...
That said the tempo is all a bit too white for me, not enough bass

You say that I am "fear mongering in E minor", and that ordinary parents wont be prosecuted.

Why do you suddenly have soooo much faith in the police to use their discretion to choose when to and when not to prosecute??

That said the tempo is all a bit too white for me, not enough bass.

Cue drum roll of batons on doors, a little dawn raiding - good bass line to finish the peace off nicely.

Needless legislation - enforce the existing laws relative to assault on kids and leave parents alone who shouldn't be included in this ridiculous time waster for our Government.

To our Government: There are much bigger fish to fry! Quit your fucking bickering and get down to doing your job. Learn how to work together for the benefit of ALL New Zealand's interests. Arresting people that beat kids is just fine by me, but please don't regulate me to death in the process!

"Just don't hit your kids - real simple" now hit that's open ended Bomber...do you mean "beat" as in the statistics that all NZrs would want to turn around or "smack"...as in millions of NZrs were subjected to it and turned out fine and its the state trying to impress its own views on parenting...I thought this bill wasn't going to outlaw smacking?!

Oh hang on...smacking has been outlawed for 100 years apparently os it can't be banned?!?!..So sorry how can there be a defence against something which is outlawed...symbolic law which infuriates middle NZ...hehe fine by me...Phyrric victory for Helen :)

Every time Bomber posts another picture of Sue Bradford, another Tumeke! reader loses their lunch.

...
There's certainly something to what Stone Cold has to say here, there is a deeply Vicious and personal attack campaign aimed at Sue, with people like Stone Cold degrading the issue to one of ‘Sue is ugly, talks with a broad NZ accent and so she’s a dumb fucking bitch who needs to have her face smashed in’, just like those clowns on the anti-CYFs site.

I’m guessing if Stone cold has kids, he hits them.

I agree, its important to keep the debate above such insults. Indeed the personal attacks on Sue do no service to the debate.

That said, I am appalled about the use of language in the debate, particually from those in favour of the bill. Use of the word 'beating' implies something completely different from smacking.

Those who beat kids are a completely different case from those who lightly smack. Those who group the two as being the same, and there are a few, are ideologically driven, and are denying the obvious difference between the two. Its propaganda, its bullshit, and fortunately 80% of NZ can see it.

...
Right - and the media referring to this as the 'Controversial anti-smacking legislation' EVERY SECOND, and allowing someone like Chester Borrows to hop up and down about it making parents ‘criminal’ – THAT is what is outrageous and fearmongering Scott! This is about repealing a section of the law that will no longer allow loop holes for parents to beat their children with a peice of wood and I believe in one case - a fucking horsewhip!!!!!!!!!

BARRY SOPER (to Sue Bradford): "After this Bill becomes law, will parents be allowed to smack their children?"

So, if that doesnt say "anti-smacking" then what does? Its her bill!

Absolutely people who hit their children with a horsewhip or wood should be locked up. No question. And the law needed changed. What was needed though was for reasonable force to be defined.