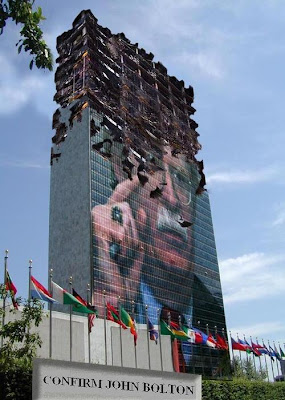 Ever wonder why during that bullshit pre-planned brutal military excursion to stamp down on Hizbollah, why America took so long to actually step in and drag their little violent mate Israel off the battered and bloodied Lebanon? Well, John Bolton just let it slip during an interview that it was because America wanted Israel to succeed and so let them do what they wanted.

Bolton admits Lebanon truce block
A former top American diplomat says the US deliberately resisted calls for a immediate ceasefire during the conflict in Lebanon in the summer of 2006.
Former ambassador to the UN John Bolton told the BBC that before any ceasefire Washington wanted Israel to eliminate Hezbollah's military capability. Mr Bolton said an early ceasefire would have been "dangerous and misguided". He said the US decided to join efforts to end the conflict only when it was clear Israel's campaign wasn't working.

Sigh. His comments dont mean that at all.

1) If Israel had preplanned this war, (at that particular time), then why was its responce so wooful?)

2) It wasnt about the kidnapping of soldiers - that was too frequent an event to start a war. It was the rocket attack, the PROCEEDED the Israeli air attacks.

Yes the yanks sat back because they wanted Hezbollah eliminated. Because the US thought it would send a message to Iran. Bolton is correct, the US had to end the war because the message it wanted to send was actually getting lost by the Israeli military inefficiency.

BTW: before you all jump all over me, nothing in my post was a justification of anything.

Yet another reason for the Mid East people to hate the USA.

They keep digging their hole bigger an bigger.

Horsepiss Scott. Your timeline is wrong and invented long after the ceasefire when the kidnapped soldier story got shot full of holes. I have posted Tania Rienhart's evidence several times. Go look it up.

Here's an interesting piece. I wonder if the U.S. will revise it's stance on Iran??

Shmoel Avivi, an Israeli retired officer, had established a firm in Iraq 2 years ago, which secretly sold arms to terrorist groups in Iraq, Ma'ariv reported.

Amnesty International reported that Avivi was one of the biggest weapon dealers in the Middle East."


Business is business I guess!!

No, if you look at media reports of the day it all started, you will see that Hezbollah launced rockets in the morning, and that evening Israel retaliated with airstirkes.

And as for your mate selling munitions to the Iraqis, he needs to be dealt with doesnt he....