IAEA: Iran expanding rather than freezing nuclear program – what now? 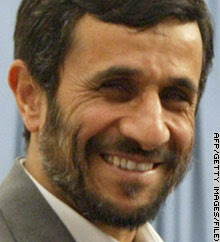 The report is out, the Iranians are expanding their nuclear program, not freezing it like they were told, none of which really surprises me. The intense fear within Iran that the American’s and Israeli’s are actually intending to bomb them is building with more internal groups within Iran criticizing Ahmadinejad’s position. The question is are the American’s saber rattling to force a compromise with Iran or has Bush over estimated the threat Iran poses in the exact same manner he did with Iraq? The problem is that after reading the behind the scene build up to the Iraq war you are left with the deep impression that Bush honestly thinks that what he is doing is right, which leaves me deeply concerned that Bush is preparing to make a date with destiny over Iran.

So where to now? The spooks within the right wing think tanks (all funded by the corporate military industrial far right fundamentalist Christian/Zionist complex by the way) are all crying that Iran is 6 months away from a nuke, the CIA (who the right wing think tanks consider tainted by too many State Department softies) say that Iran won’t have a nuke before 2017. How will Bush, a man convinced of his own destiny by the events of September 11th deal with Iran?

If he is as pathological as he seems to be, and he really does intend to bomb Iran, his window of opportunity is extremely narrow, his guiding influences have stated 6 months and the cost of keeping two carrier attack fleets ready is just too expensive to keep up indefinitely and I have yet to see an American military build up that was ever successfully diffused.

If the war drum does start to beat again, we will all have to decide very quickly which side of the fence we are all on in regards to America, because such an action will see furious local Muslim groups everywhere – even in little old NZ – who would actively seek to harm American assets. The true cost of this aggressive folly could be felt in every city around the world.

U.N.: Iran expanding rather than freezing nuclear program
VIENNA, Austria (AP) -- Iran has expanded its uranium enrichment program instead of complying with a U.N. Security Council ultimatum to freeze it, the U.N. nuclear watchdog agency said Thursday in a finding that clears the way for harsher sanctions against Tehran. "Iran has not suspended its enrichment-related activities," said the International Atomic Energy Agency, basing its information on material available to it as of Saturday. The conclusion -- while widely expected -- was important because it could serve as the trigger for the council to start deliberating on new sanctions meant to punish Tehran for its nuclear intransigence. In a report written by IAEA chief Mohamed ElBaradei, the agency also said the Islamic republic continues construction of a reactor that will use heavy water and a heavy water production plant -- also are in defiance of the Security Council’. Both enriched uranium and plutonium produced by heavy water reactors can produce the fissile material used in nuclear warheads. Iran denies such intentions, saying it needs the heavy water reactor to produce radioactive isotopes for medical and other peaceful purposes and enrichment to generate energy. The six-page report obtained by The Associated Press also said that agency experts remain "unable ... to make further progress in its efforts to verify fully the past development of Iran's nuclear program" because of lack of Iranian cooperation. That, too, put it in violation of the Security Council, which on December 23 told Tehran to "provide such access and cooperation as the agency requests to be able to verify ... all outstanding issues" within 60 days. The report -- sent both to the Security Council and the agency's 35 board member nations -- set the stage for a fresh showdown between Iran and Western powers.