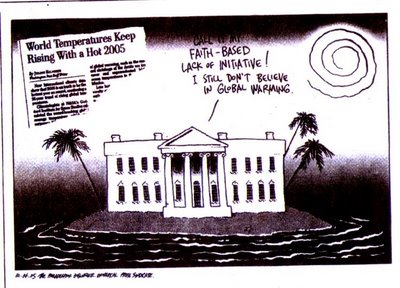 Our business friendly mates on the right don’t like Global warming. They would hate to admit that what those tree huggers have been pointing out for years is actually true and that the capitalist consumer culture they love so much might in fact be killing off the planet. Indeed I’ve even had right wing bloggers here on this site claim environmental concerns aren’t just the preserve of the left, and that they care as well. Neato. The fact still remains that our right wing friends and the systems they have created to benefit themselves have a lot to answer for the current environmental problems we face, should they have a role in the changes or should they simply have the changes forced upon them? As the environmental consequences of rampant capitalist consumerisim become more and more apparent, these are questions that Australia is being forced to ask itself now.

Australia ponders climate future
Parts of Australia are in the grip of the worst drought in memory.
Rainfall in many eastern and southern regions has been at near record lows. On top of that, the weather has been exceptionally warm. The parched conditions have sparked an emotional debate about global warming. Conservationists insist the "big dry" is almost certainly the result of climate change and warn that Australia is on the brink of environmental disaster.
Other experts believe such hysteria is wildly misplaced and that the country shouldn't panic.

'A war-like scenario'
The drought in Australia has lasted for more than five years. The worry for some is that this could be the start of a protracted period of low rainfall that could go on for decades. "The really scary thing is last time we had a drought of this intensity that lasted about five years - it lasted for about 50 years," cautioned Professor Andy Pitman from Macquarie University in Sydney. "The politicians truly believe this is a five-year or six-year drought that will break sometime in 2007 or 2008. But it might not break until 2050 and we aren't thinking in those terms at this stage," Professor Pitman told the BBC. Global warming, the drought and the future of dwindling water supplies will undoubtedly dominate talk at barbeques and dinner parties this festive season in Australia. "We're in a state of emergency," said Cate Faehrmann from the Nature Conservation Council of New South Wales. "We need to treat this as a war-like scenario. The people are really worried that we are going to run out of water." She added: "I can imagine Australia being a desert in a few decades' time in some of these agricultural areas. The soil is blowing away, the rivers are drying up. "I think there will be plots of land abandoned and perhaps whole agricultural practices abandoned."

...
Hey has anyone else noticed that only on Rupert Murdoch's news channels that they are reporting that 'climate scientists' (they won't say who) are saying that it's all very natural for Australia to be going through this drought 'there are natural cycles' they say - here's the deal folks, yes there are natural cycles, but global warming means that freak 'once every 40 year' weather events will happen EVERY YEAR - it's not that we haven't had snow falling in Summer in NZ ever before, but it is a freak occurance which will now start becoming the norm. Oh and here's something to think about - let's remember that we are living with temperatures .6 degrees above where they used to be, because every Government on the face of the planet are a pack of weak corporate whores, we are allowing the planet to warm another1.4 degrees to 2 degrees in order to allow as little interference to profit margins as possible. Imagine how fucked the planet is going to get at 2 degrees when we can see the damage of .6 degrees.....

Climate change isn't happening is a favorite slogan for Corporatist denyer's with profit forecasts in mind for this century. Uh - Charlie Peddersen, I hope you are reading this. Try marketing this strategy to your share holder's!

The End of the West as We Know It?
by Anatol Lieven

Every political, social and economic system ever created has sooner or later encountered a challenge that its very nature has made it incapable of meeting. The Confucian ruling system of imperial China, which lasted for more than 2,000 years, has some claim still to be the most successful in history, but because it was founded on values of stability and continuity, rather than dynamism and inventiveness, it eventually proved unable to survive in the face of Western imperial capitalism.

For market economies, and the Western model of democracy with which they have been associated, the existential challenge for the foreseeable future will be global warming. Other threats like terrorism may well be damaging, but no other conceivable threat or combination of threats can possibly destroy our entire system. As the recent British official commission chaired by Sir Nicholas Stern correctly stated, climate change "is the greatest and widest-ranging market failure ever seen."

The question now facing us is whether global capitalism and Western democracy can follow the Stern report's recommendations, and make the limited economic adjustments necessary to keep global warming within bounds that will allow us to preserve our system in a recognizable form; or whether our system is so dependent on unlimited consumption that it is by its nature incapable of demanding even small sacrifices from its present elites and populations.

If the latter proves the case, and the world suffers radically destructive climate change, then we must recognize that everything that the West now stands for will be rejected by future generations. The entire democratic capitalist system will be seen to have failed utterly as a model for humanity and as a custodian of essential human interests.

Even the relatively conservative predictions offered by the Stern report, of a drop in annual global gross domestic product of up to 20 percent by the end of this century, imply a crisis on the scale of the Great Depression of the 1930s; and as we know, the effects of that depression were not restricted to economics. In much of Europe, as well as Latin America and Japan, democracies collapsed and were replaced by authoritarian regimes.

As the report makes clear, however, if we continue with "business as usual" when it comes to the emission of greenhouse gases, then we will not have to wait till the end of the century to see disastrous consequences. Long before then, a combination of floods, droughts and famine will have destroyed states in many poorer parts of the earth — as has already occurred in recent decades in Somalia. (I might jump in for a moment and mention the situation that is currently going on in Australia for added reinforcements)

If the conservative estimates of the Stern report are correct, then already by 2050 the effects of climate change may be such as to wreck the societies of Pakistan and Bangladesh; and if these states collapse, how can India and other countries possibly insulate themselves?

At that point, not only will today's obsessive concern with terrorism appear insignificant, but all the democratizing efforts of Western states, and of private individuals and bodies like George Soros (Google him for info on his "Open Society") and his Open Society Institute, will be rendered completely meaningless. So, of course, will every effort directed today toward the reduction of poverty and disease.

And this is only to examine the likely medium-term consequences of climate change. For the further future, the report predicts that if we continue with business as usual, then the rise in average global temperature could well top 5 degrees Celsius. To judge by what we know of the history of the world's climate, this would almost certainly lead to the melting of the polar ice caps, and a rise in sea levels of up to 25 meters.

As pointed out by Al Gore in "An Inconvenient Truth," this would mean the end of many of the world's greatest cities. The resulting human migration could be on such a scale as to bring modern civilization to an end.

If this comes to pass, what will our descendants make of a political and media culture that devotes little attention to this threat when compared with sports, consumer goods, leisure and a threat from terrorism that is puny by comparison? Will they remember us as great paragons of human progress and freedom? They are more likely to spit on our graves.

Underlying Western free-market democracy, and its American form in particular, is the belief that this system is of permanent value to mankind: a "New Order of the Ages," as the motto on the U.S. Great Seal has it. It is not supposed to serve only the short- term and selfish interests of existing Western populations. If our system is indeed no more than that, then it will pass from history even more utterly than Confucian China — and will deserve to do so.

...
My God that is a powerful essay - thanks for posting it bro - I had never thought about the ramifications for the “self-evident” democratic state, but Anatol Lieven makes a compelling case to suggest the cataclysmic global warming future we face will be populated by people who will look for someone to blame, and of course it will be the secular democratic state that will be attacked for bringing down the wrath of the gods through their own greed. The story of a civilizations collapse through their own greed is a deeply embedded human theme perhaps started as firsthand warnings of such folly and over the centuries have watered down as a suburban myth from history desperately trying to reach out across the eons to warn of oblivion if the path of arrogance is championed as National interest. We ignore these fables at our own peril.