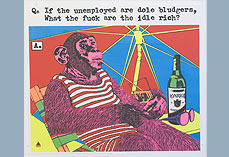 You can see why Labour released this little gem in the holidays, talkback political correctness blow hards must be near hysterical with news that the Government intends to lower fines for poor people. The reality is that if you are poor, getting a fine has no effect, you can’t pay it and simply add it to the long list of other things you can’t pay for. This mentality of course erodes any respect for the system, the real challenge is to find the compassion within ‘middle class’ folk to allow Governments to expand the franchise of democracy to those on the bottom who don’t follow the rules because they have nothing to loose. Expanding that franchise could be through 40year low interest mortgages for beneficiaries to buy their own state home, once you have assets, you tend to respect property – you make people value the system once they have a stake in it.

Government's plan slashes fines for people who can't pay
Criminal offenders on low incomes face punishments other than fines as the Government responds to public anger at the number of fines never paid.

Alternatives such as warnings as well as lower fines and enforcement penalties are being considered for young and poorer offenders.

But the 35 per cent of fine defaulters who can afford to pay and don't are facing tough action.

They may be threatened with driving licence suspension and credit agency blacklisting.

Another proposal floated in a review of fine infringements is to increase the use of demerit points for traffic offences.

The Government is concerned that attempts to enforce payment are targeted at those who cannot afford to pay, and does little to encourage those who can.

''once you have assets, you tend to respect property – you make people value the system once they have a stake in it. ''

That point is highly relevant, I think. Well said.

When I was flat broke I got a speeding fine - paid it of course, but it hurt.

However it did make me very, very careful not to get anymore.

In fact it hurt so much I still take great care not to attract fines - successfully so far.

To me it was simple - if I don't want to pay fines don't do things to get them.

When I lived in South Auckland I got the feeling that certain people were let off when caught without car rego and stuff, may be they made a unilateral decision that there was no point in issuing fines to people who can't/won't pay.

When I got pulled over I wonder if my fine was issued because I looked like I could and would pay.

Don't know but I would like to see some research into how fines are issued and when 'discretion' is used to let people off.

A friend of mine was attacked by a bloke while driving his car – the victim had the presence of mind to get the attackers car rego and report it, waste of time – the attacker was let off, never got any explanation as to why. Maybe those who look poor are allowed to attack those who look (but may not be) less poor. Just have to accept if I suppose - such if life.

Fines normally take the offender's capacity to pay into account. I don't think there's a problem with codifying that somewhat. What they should be doing is deducting money via the tax system - that way, even if you are on a benefit it hits you in the wallet.

the shrill screaming is in full force at kiwiblog!

The police issue more tickets for inhouse 'targets' and more people default on paying fines. I think its the disfunctional relationship between collections and fine issuers that is the problem, not the fines or the people that do not pay.

There is no fair system, its always to easy on some and tough on others. Go to Europe and you pay on the spot or get arrested!

Who is an inhouse target - I have thought I was but maybe everyone feels picked on at times.

For some people paying any sort of bill (whether its rent, a fine, a telephone account or something they ordered from an infomercial) is against their religion.

Their Baycorp sheets are like novels, they choose to live outside mainstream society and really don't care.

Its a growing sub-culture and I can't see making it easier will help anyone in the long term.

Snigie has a mate who can't leave the country, can't get a loan, can't get a mortgage, bad credit up to his eyeballs, financially fucked.

Economic waste of space.
If he is a single man, perhaps he would better serve the community as an organ donor.

Pardon me if I pull out the world's smallest violin here - especially when it appears an overwhelming majority of these fines are for traffic offences. Then again, I'm one of those oddballs who doesn't buy the boofhead mantra that being as asshole behind the wheel of a car is a fundamental human right.

When the size of the punishment (in this case traffic fines) get totally out of kilter with the gravity of the offence it twlls one of two things is occurring either a) The purpose of the criminal justice system has been perverted to become revenue gathering scheme via a form of random poll tax on the citzens or b) the system is completely powerless to stop the behaviour in question, so it responds with more and more draconian punishments the consequences of which become more of symbol of their failure.

...
I think the wider issue seems to be getting missed here folks - we have an underclass in NZ, it is an underclass we only see when awful things happen and we are suddenly thrust into that environment of poverty by the media and we respond in a human way with anger, refusing to accept that poverty would make some people fall to such beatial behaviour. Remember the Kahui case and how angry we all got? The Government are having to look at new ways of making fines work because the underclass simply can't pay the fines they are hiy with, and they react with indifference. I often wonder why it is the 'woking class' or the 'middle class' or the 'upper class' stick to the rules more often than the underclass, is it because we are so much more ethical and moral than those in the underclass? No, I don't think so, I think it comes back to the fact that a lot of us have something to lose by breaking the rules, people with nothing don't bother with the rules. I've spent a lot of time trying to think about what it is as a society we could do next that would really tackle the problem with those in the underclass, and for me it keeps coming back to this idea I've had about 'bringing people into the democratic franchise'. If you have something to lose, you will play by the rules and with ownership comes an appreciation for ownership. If we were serious about lifting the living standards of Beneficaries and the very poor, I honestly think a momentous government poliocy akin to the first welfare state needs to be sought out. Imagine if the Government could sell State Houses (for Government valuation only, not market prices) to those on the benefit through cheap mortgages (through Kiwi bank?) that simply deducted mortgage repayments out of a persons benefit. You could recapitlise an entire class, providing an assett base that allows those with nothing to finally have a share in society. Such a move would echo the compassion shown with the first welfare state, but I wonder if enough NZers would enter into that compassion or would get angry that someone else was getting 'more' than them? The problem is poverty, I've posted many stories here that always points to poverty as the leading factor connecting many of our poor social statistics, wagging fingers and telling those at the bottom that they must try harder isn't working, I look at a unequitable world where 2% of the population own over 50% of the wealth - that world simply can't continue if we really want to have a socially just society.

Flip side of course is that now there is one fine for poor and one for rich, it is a short jump for the case of the rich being able to say be guilty of manslaughter and buying their way out of a jail sentence by paying compo to a poorer victim.

Fine or punishment by ability to pay is such a stupid stupid idea and quite repugnant to justice.

You know that Bomber and your rant above about the underclass is completely irrelevant.

The prevention of underage gambling and identifying and helping problem gamblers is a core objective in running an integrity driven online gambling operation. Gambling at blackjack, or any other Williamhillpoker game for that matter is a great form of leisure and entertainment, but for some it can potentially be dangerous.