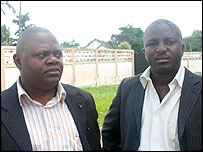 When someone is pointing out how corrupt you are, best thing to do is counter that with accusations of your own that suggest corruption. One of the things that really fucks me off about Tim going down for Sedition was that the cops trawled through Tim’s past and brought up corruption charges on things he had done 10 years ago, the wider issue of protesting against the Government’s racist seabed and foreshore legislation gets lost.

Congo activists fined for forgery
Two leading anti-corruption campaigners in Congo-Brazzaville have been found guilty of forgery and breach of trust.
Both say the trial is an attempt to intimidate them. Christian Mounzéo and Brice Mackosso were given two month suspended prison sentences and fines of $600 each by the court in the second city, Pointe-Noire. The few hundred people packed into the small courtroom to hear the short judgment being read out expressed shock and surprise at the verdict. Friends said they were astonished the men could have been found guilty of breach of trust and forgery when the international organisations who had given the money in question had vouched in court for the men's innocence. Christian Mounzéo said afterwards the verdict had been expected. "We know that the government has used justice as an instrument to prosecute human rights defenders so we are not surprised about this judgement," he told the BBC.

Verdict criticised
The public prosecutor had earlier asked the judge not to send the men to jail because he said the arrests had already damaged Congo's reputation. Both men have always denied the charges which relate to a donation of around $4,000 and a computer. Their arrest in April was condemned by human rights groups and the World Bank. The men say they will appeal this morning's decision, which they say is designed to stop them acting as independent experts on two new anti-corruption committees.
Congo is sub-Saharan Africa's sixth largest oil producer but has been told by the World Bank and International Monetary Fund that it must be more open about its use of oil revenues if it wants to qualify for debt relief.

What? A corrupt government in Africa? Never!

It must be America's fault.

white people behind it somewhere, laws

...
Hmmm - if I remember my Congo history (and I will admit it is a little shaky) the CIA did in fact have a hand in the killing of Congos real leader right after Independence from the Belgians...

Patrice Émery Lumumba (2 July 1925 – 17 January 1961) was an African anti-colonial leader and the first legally elected Prime Minister of the Democratic Republic of the Congo after he helped to win its independence from Belgium in June 1960. Only ten weeks later, Lumumba's government was deposed in a coup during the Congo Crisis. He was subsequently imprisoned and assassinated under controversial circumstances in January 1961. Patrice Lumumba continues to serve as a significant inspirational figure in the Congo as well as throughout Africa.

So although dear old Mike was just makinga snide dig, it does in fact turn out that he was right - yes America fiddling in others affairs AGAIN