Queen Street: Is it really about the trees? 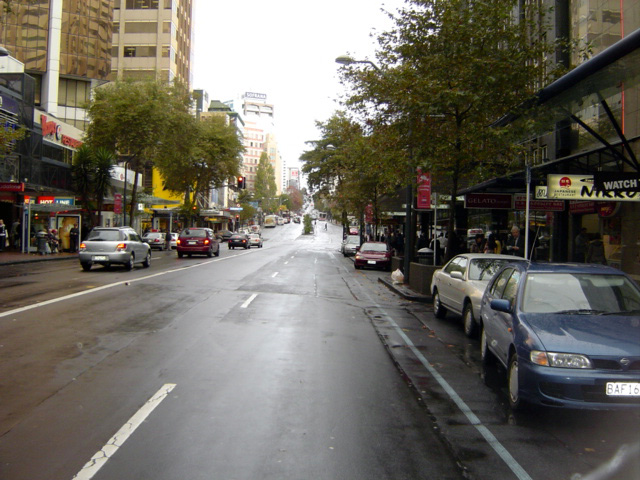 On the left the whatever trees; right are some native plantings already on the lower part of Queen St.

Mr Bhatnagar is joining the fray. The issue: Auckland's golden mile "massacre" tree replacement. He's asked me to link the story - and I shall. NZ Herald reporting:

"Prominent Aucklanders are taking legal action to stop the Auckland City Council removing the 20 condemned trees in Queen St. Lesley Max said the council did not seek or heed the views of Aucklanders when it sought resource consent to remove the exotic trees and replace them with natives as part of the $30 million Queen St upgrade.
The so-called "Queen St massacre" is set for January 13 and 14, although Mayor Dick Hubbard has said he will consider options to keep 20 of the 36 trees tagged for removal between Mayoral Drive and Wellesley St...
Lesley Max has banded with veteran newspaper campaigner Pat Booth, NewstalkZB host Leighton Smith, former Hobson Bay Community Board members Stephen Goodman and Aaron Bhatnagar and several others to take the legal action...
The group was seeking an interim injunction to stop the council removing the trees..."


I see three streams of issues driving this one (in order of importance):

1. Partisan/ideological/political gain that can be achieved on a potentially "populist" issue by conservative/right activists against the left majority council and Mayor.

2. Conservative/reactionary/cultural cringe knee-jerk backlash to anything "native" at the expense of anything "exotic" (this type of warped thinking has seen Muriel Newman and her White concerned citizens committee objecting to local Maori changing a mis-spelled Maori name! - does it get any more blatantly racist than that? Could it possibly? Are these the same people who want to keep the Union jack? is that what the axis of opposition is?)

3. Concern for shade cover and the general amount of "greenness" of the street.

(Issue three is very much at the bottom of the list from what I can tell at this stage.)

On the aesthetic issue I would prefer the iconic - and I use that often over-used term in it's true sense here - iconic form of the cabbage tree and the nikau palm over the scraggly, scruffy, anonymous, utterly un-unique, anti-iconic, nothingness of whatever nothing exotic trees (whatever the hell they are?) that we have at present. The only issues are 1) the lack of shade cover with those natives, and 2) Isn't it the pohutakawa that really represents Tamaki Makaurau?

Where were these people, including the King Honky, Leighton Smith, when the Britomart project was being re-written and the massacre of QEII Square took place? The fuck knuckles of the Council decided to turn the only open space of Queen Street with all it's pohutakawa trees into a bloody bus depot, a large unusable, unfriendly, anti-pedestrian ashphalt expanse and I don't recall any objections, petitions or injunctions for that. Not one. That is a far more important issue than those exotic trees - by a long, long way.

Turning back the clock: Left: Until c.1957 it was trams, then trolley buses (and a cabbage tree planting in the median strip) until c.1971, and from then until about two years ago it was a public, pedestrian, tree planted, open space. Right: back to a wasted, shitty ground level public transport depot.

Before:Happy people enjoying the square with fountain and pohutakawa trees.

The original briefs for Britomart made it clear that, and quite logically, the QEII pedestrian space should stay and the buses be placed at the sides or behind or anywhere except in that public space... so after the Council get through with it what happens?... They create a public square at the back, where no-one will see it or use it and put all the buses out the front where once people enjoyed an open and somewhat green space. And I've heard every ridiculous excuse from the local Lefty apologist that it would cost too much and the buses had to go somewhere and that small discrete spaces were "in" now and large squares were "out" .. etc. etc. I don't think he even really believes what he was saying - he was just towing the party line. And this is something done under the John Banks Council! [Disclosure: I did tender a plan for the redevelopment involving creating a bigger square by moving the CPO building back and having the new arena immediately to the rear - all things I stand by today].

You see, compared with that issue, I really just don't care about whatever happens to those trees. They are without any merit, save for shade (and it so struck with the shadows from high rise towers that it is moot) and the fact they are a green colour. Other than that they ought to be completely dispensible. At least if the trees were iconic the street would actually be memorable for trees rather than just bad parking, banks and over-priced shopping. All the hysteria over the "massacre" seems misplaced and for ulterior motives. Ask anyone what the trees are on Queen St? Would they know? I think they are conifers or beeches - I'm not sure at all. If those trees were worth saving we would all at least know what they were.

You see why Hubbard switched to keeping some of them by the sounds of it - he just doesn't need the aggro. If you want to beat him up over something choose another issue - there will always be plenty.

And is it not hypocritical for the sort of anti-RMA people (who complain about the authorities having to consult the public at all with things like motorways) to now be whining to the council and using the RMA to hold things up? What happened to "just get on with it" and "too much useless talkfests" etc? Oh how they change their tune when they have a chance at an anti-PC crusade. This is what it is isn't it?

... maybe this has been already covered, but is anyone suggesting that we keep the existing trees AND plant the new natives? Why can't we double our (pretty meagre) greenspace?

MS: Yes. Just been through Queen St - and it seems tthat quite a few cabbage trees are already planted - in the dozens. They seem to be co-existing with the other anon. trees without a problem - some of them are a bit weedy - but then again so are some of the other trees, spindly - maybe they haven't been pruned correctly, or at all? The nikau palms look great. They are flowering at the moment by the looks of it.

It's old people liking vanilla. If someone has become emotionally attached to rows of scrawny immature plane trees they have some issues alright.

It's not about trees, it's about Dick. He's a dick and this is a chance to start his losing of next years mayorlty election.

Don't you agree that QEII square was windy, smelly, shaded, and not really much more than a place to walk through anyway. I certainly never saw Aucklanders enjoying it like, say, Wellington's waterfront. It had already been upgraded once, I'm not sure that it could ever have been a great reserve area.

I think you've got you point about Parahaki in Whangarei very wrong, and unfortunately revealed predjudices of your own in the process. The issue was not 'white vs Maori' as you post insinuates. Muriel Newman called what was a bicultural meeting. The meeting surely degenerated, and Muriel called it off, but that doesn't make her a racist. The issue was whether one group in the community should have the right to change a placename familiar to 4-5 generations of Whangarei residents of many different backgrounds. An obvious question if you believe in the treaty as a partnership giving some Maori rights based on birth, in perpetuity. Not so simple, and well worthy of a public meeting, for those of us who would like to see a free society where all are equal before the law.

People have made those sorts of comments about QEII square for some time - but I'm definitely not of that negative opinion. It was a sunny area firstly (except for the part outside the shopping centre which of course they kept - but with a lot less seating and some wanky kauri trees - now that was PC if anything was), and it was not smelly. It had a lot of pigeons - that was it's only problem. I used to enjoy a Dutch/Indonesian burger from the cart and would eat it under the pohutakawa trees. It was a product of the 70s but the point I'm making is that it has been turned from a pedestrian/recreation zone to a bus depot zone - that is inappropriate - as was cutting down the trees there. It was the gateway to Queen street and much more than just a concourse to the ferries and could be once more.

Dr Muriel Newman is a nasty race-baiting bigot, (as is Steven Franks, Nick Smith etc. etc.) That is a factual statement - and I offer her political debate centre website as ample evidence of it. It is not a prejudice it is from reading as much as I could stomach on the issue to make the assessment and is not based on what did or did not occur at any "bicultural meeting."

"The issue was whether one group in the community should have the right to change a placename familiar to 4-5 generations of Whangarei residents of many different backgrounds." - familiarity, as I recall the saying, breeds contempt. As I understand it the place name was given to it by "one group" and then "4-5 generations" of other people got it wrong. The problem being that the people who have it wrong don't want it corrected. Why is that? Presumably if 4-5 generations of mislead and/or ignorant immigrants mis-reported, mis-spelled and mis-pronounced and mis-understood a place name we should let that continue?

"An obvious question if you believe in the treaty as a partnership giving some Maori rights based on birth, in perpetuity." - How does that follow from what you said? The vague reference to birth rights is confusing here - perhaps you are labouring under Dr Brash's misapprehension.

"Not so simple, and well worthy of a public meeting, for those of us who would like to see a free society where all are equal before the law." - Equal? Free society? This is all in relation to a mis-spelled place name? Remarkable. You see, given the absurdities, why the only relevant reason left is that one side are Maori and the other side are not and are fixated on it. Given the motivations, it is hard to conclude that Newman's shennanigans are anything less than Pakeha saying to Maori that Pakeha will decide what Maori names are. That is even beyond racism, it is quite simply mad.

If Newman has back-tracked in her stance and does not hold an opinion on what the name should be or supports the "one group" then I take it back - I just don't want to go to her Stormfront Whangarei website to find out.

Simple question is whether or not it was just a misspelled place name. If so then my arguments follow. I understand the answer to this question was not entirely clear.