﻿
Gaza is a narrow strip with over a million refugees from episodes of Israeli intimidation and harassment, squeezed in. Israel is a Jewish state founded on the typical 19th century colonial basis of ethnic purity, land seizure and occupation, large-scale immigration from Europe and a large-scale containment, repression and exile of the other people already there. Israel is now dependent on immigration to maintain a dominant majority and they will not permit the vanquished Arabs in Gaza or any of the other millions of Palestinian refugees in neighbouring countries and the West Bank to return. In Australia this colonial ideology was dubbed the "White Australia Policy", in the United States it was called "Manifest Destiny", in South Africa they called it "Apartheid", in Israel they call it "Zionism" and in New Zealand and Canada - where conformist and incurious smugness combines with favourable comparisons to their bigger neighbours - their governments and European populations still can't bring themselves to acknowledge they are colonial entities let alone give a name to what they have been doing. [UPDATE: After some more thought the name of the colonial ideology in New Zealand is simply: "New Zealand". That is what the government mercenaries and kupapa were killing and dying for according to the memorials to the so-called "Maori Wars", not for the Queen of for the Empire, but for "New Zealand".]
The US and NZ and many other Western nations backed the creation of Israel against the wishes of every country in the region - and to the extent NZ still backs Israel (eg. by the NZ government inviting the Israelis to establish an embassy in Wellington, through trade, by participating in Israeli diplomatic stunts like orchestrated walk-outs on Iran etc.) then the NZ government too must have blood on its hands.
Gaza voted for a Hamas government in an election and for this democratic sin they have been collectively punished - blockaded on all sides (incl. the air and the sea) by Israel - an act of war.
-----
President Obama said:
"There is no country on Earth that would tolerate missiles raining down on its citizens from outside its borders. So we are fully supportive of Israel's right to defend itself from missiles landing on people's homes and workplaces and potentially killing civilians.
"And we will continue to support Israel's right to defend itself," Obama said.
[...]
"My message [...] was Israel has every right to expect that it does not have missiles fired into its territory."

-----
Commentary about Israel from the Americans occurs in a void inside a bubble of their own hypocrisy and Obama's remarks are typically callous and one-sided. No country on Earth - we might immediately respond - would tolerate being blockaded in the brutal manner Israel has to Gaza. Surely, Gaza has a right to defend itself too? But they aren't the chosen people, they're Arabs and they can be slaughtered en mass and at will on the whim of the IDF without any moral qualms it seems.
In this current conflict it appears that Israel is running out of legitimate targets and is going down the list in the way they did in 2008. Eventually they will be left blowing up schools and hospitals - like last time when they shelled UN-marked schools with banned chemical weapons.
And the local right wing Jews dutifully pump out the IDF propaganda: 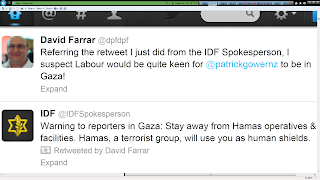 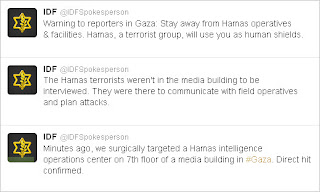 The IDF are the ones killing civilians here, not the Hamas-linked groups. It's 100+ dead Palestinians and about 3 Israelis. The IDF know full well that civilians will die when they hit the kill button on their American made and funded machines of war. In 2008 the IDF slaughtered 100 Arabs for every Jew. Does this mean they will kill another 200 Palestinians in Gaza?

Here's a bit of "put your tin foil hat on" material for those interested in this conflict: http://www.marketoracle.co.uk/Article37585.html
Of course if it pans out that way it wasn't tin. We'll just have to wait and see.

So reminiscent of the conflict in 'Northern Ireland'. Mainstream belief is that it is all about religion, but not at all about religion, but about colonisation. Religion is the excuse used to justifiy the act. The drawing of arbitrary lines to create a nation state, or to bolster an existing colonial powers realm, is simply a construct. The displacement of people and denial of their culture is a direct result of such a construct. Why is Israel and its people so sacred, yeah, I know, but hey, even if you believe 'that story', you can't just remove the Palestinian people from their homeland and expect them to be happy about it.

Yeah the USA supports this war cos its another step towards the war with Iran.

'that story' refers to the birth of Jesus etc, not to be interpreted as a flippant remark on the very real persecution the Jewish people suffered under the Nazi regime. Hope nobody read it as that.