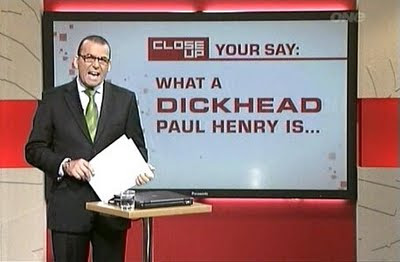 I'm listening to that awful Paul Henry rave on and on and on about the new draconian policy by the Hollow Brain of Steven Joyce to stop funding students who fail 50% of their courses and this has now been imposed retrospectively starting last year.

Paul is doing his usual National Party Candidate bullshit while Pippa (wasn't she a former cheerleader? How has she won the right to front the top current affairs show in the country on Sunday while real Journalists like Cameron Bennet are forced out - like that nice Kevin Milne?) is pulling her sad Devonport Mum face trying to agree with Paul while look empathetic.

Here's something to jam down Paul Henry's throat. I hosted a debate at Auckland Uni on Monday between Sam Lotu-linga, Gareth Hughes and Jacinda Ardern about education policy on this very issue. Sam explained that the Government wanted 'productivity' and that was why National were pushing ahead with the 'pass 50% our you are out' game (he didn't note the new news released today that this policy would be imposed retrospectively). From the floor a young woman got up to ask a question. She said in her first year she had been a straight A student, but then she was raped (the entire Quad went very silent over her statement). She pointed out that her studies suffered and she failed half her papers. She wanted to know why this blanket policy to dump students was so cruel (she also noted she was unable to get ACC counselling now the policy had been changed by this Government to cut rape counselling funding). Sam was a but stunned, the other two political spokespeople were stunned, the Quad was a bit stunned (I was a bit stunned). The student said it was easy for National to pass policy like this when they didn't know the reasons why students failed.

To Sam's credit he said he would ask Steven Joyce to look at possible exemptions form this blanket ban, which would be a joke in itself as that is what the Universities do right now. If you are failing 50% of your course, Universities currently examine the reasons why you are failing and make a call to continue you or not, so what Sam would be effectively asking is the current status quo as opposed to this retrospective slash and burn.

Of course none of that seemed to occur to Paul Henry, the reasons why students might fail never occurs to Paul Henry, Paul Henry I am to assume, has no problem with rape victims losing their ability to get an education.

When I first heard former National Party candidate Paul Henry had won the New Idea People’s choice award, I was as horrified as seeing Oliver Driver interview himself in the Sunday papers. How could Paul Henry win anything more than derision I asked? How God? Why are you punishing us in such a manner? Lord, have we not sacrificed enough plump farm animals and taken enough cash from poor people to build you churches of gold? But then the Lord came to me in a dream and reminded me it was the New Idea people’s choice award and who read New Idea? Receptionists, hairdressers and bored suburban housewives who all vote for John Key, these are people who willingly chose to drink coffee at McDonalds, their taste is as insidious as Katy Perry on commercial radio.

Watching Paul Henry in the morning is dangerous to your intelligence.

your indignation and anger is palpable, honest and shared.
i tend to agree with you my good man

Watching Paul Henry
this morning was sickening
he is such a dumb prick about anything
that doesnt support his shity Nat Party.

How dare he tell people to just leave the country if
they fail, what a productive answer. Then crying about the tax payers having to
pay for these loans, doesnt he realise we are ALL
tax payers even the students he is happy to trod
on?

And off topic, when Ardern mentioned Key's pathetic
accountability skills while handling the ACT party
debarcle, Henry yelled out 'I'm not talking about that'
God how childish, that show is the most biased piece of shit.

hey whats wrong with drinking mcdonalds coffee?(the cheap stuff you get with the fries not the fancy pants stuff they sell in the separate wanky little 'mccafe') Its the cheapest caffeine fix around. we cant all aford choco latte enemas in Ponsonby...agree with you about that smug Prick henry though.

We won you lost eat that

New Ideas Peoples award? They haven't had a new idea since Adam rode a skateboard and neither has Paul Henry.

If you don't like him don't watch him. Simple solution really.

Interesting to hear people talking about Paul Henry. Obviously they are watching him, otherwise why comment.LOL. What a lot of double standards. You will have to find someone else to throw your foul mouth at, if TVNZ let him go. I hope Rick Ellis doesn't buckle at this rediculous outrage.