What John Key told the US Media about NZ 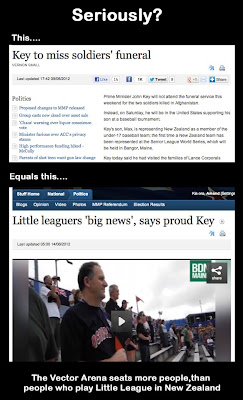 Key has audacity to tell the US media that his sons baseball game is 'big news' in NZ???

How exactly? 'Big news' in the way a cult of personality culture heaps praise on the dear leader because his child is magical and born under a double rainbow comet 'big news' or 'big news' in the way that he decided to go to this game instead of attending the funeral of two dead soldiers for a war he recommitted us to?

John Key's arrogance knows no actual end. I can assure the Prime Minister I am not the least bit interested in his sons game.

It is Big news, you didn't hear anything else other than the Olympics and John Key misses funerals for sons baseball game

Clearly this depends on what your definition of "news" is? It seems to me you have not watched nearly enough MSM "news", or you would have realised that "John Key's Son Plays Baseball in the USA" is by every measure a major "news" story.

i can assure you Bomber the Pm NZ is not the least bit interested in what you think.

@ Paul Scott . You know what Paul , you'd be correct . And that's what's so absolutely fucked about Nu Zild . The reason jonky couldn't care , and probably doesn't know about Bomber Bradbury or Tumeke is because there are not the numbers to shove the voices of reason , common sense and sanity from the minority who follow Tumeke down his throat . NZ has become even more of a dead-beat shit hole full of greedy wannabes and beige , grey car drivers than ever before . Haters and takers . Cowards unless full of Brierleys piss . Real Estate agents and Bankers . Liars and swindlers . Lawyers and financial Experts . Useless cunts and the otherwise unemployable . They all take turns to wipe their flaccid ares's on this land . Look at where we are compared to where we were ! We're fucked ! It's Too Much !